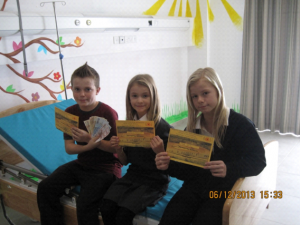 Several months back we had a call from Lisa Moakler asking if she could bring her son to visit the Hospice. Her son Cameron, and his classmates who attend the International School of Paphos were asked to present on a charity of their choice. Cameron picked the Hospice as his chosen charity. During his visit and tour of the Hospice he collected facts and information . Suffice to say, Cameron’s presentation was selected by his classmates as the best and most valid, particularly as the School is in the vicinity of the Hospice, and he was asked to repeat the presentation at School assembly!

Lisa also mentioned that her daughter Georgina and her friend Tyler Booth were interested in the Hospice, they both had lost loved ones and they had developed a dance in their memory. Mona Skordi suggested that they come to the Hospice open fun day on 23rd November so they could perform their dance, they did and it was very well received by the large audience present!

What we were not aware of was that the children cajoled their parents to help them raise funds for the Hospice. So a race evening was organised at the Moakler household, with prizes of Chocolate for the children, and cash for the adults who supported the evening, €300 was raised!

The children visited the Hospice on 6th December and the cash donation was presented, appropriately in a child’s bedroom to Mona Skordi, Hospice General Manager.

In addition to the above, Cameron has been actively involved in collecting shoe boxes to support Solidarity, a charity who supports the needy of Paphos. The boxes contain donated toys and will ensure that no child goes without a gift this Christmas; his class have already donated 30 boxes.

We hear a great deal in the Media about the youth of today, often it is negative, it is inspiring to meet Children who selflessly give up their time to support others.

Archangel Michael Hospice is very fortunate to have the Support of Cameron, Georgina and Tyler, and warmly thank and congratulate them for their efforts.