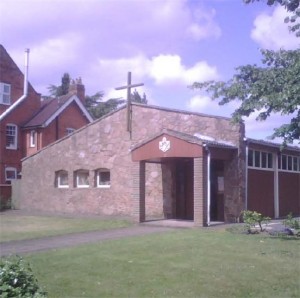 In the early years of its use by the Catholic community there were no depictions of the Stations of the Cross on the walls of the church of Agia Kyriaki – they not being a feature of Orthodox churches. The ones on display today were a gift around 20 years ago from the small parish of St Pius X, in Narborough near Leicester, and came to be there in a very “providential” way.

Two regular visitors (and honorary parishioners) were on holiday in Paphos during Lent one year and went along to a Stations service where they found Fr John putting up little card reproductions of the 14 Stations around the walls of the church. Commenting it was unusual not to find permanent Stations in a Catholic church they thought no more of it until back in the UK attending Mass at their own church the following weekend. 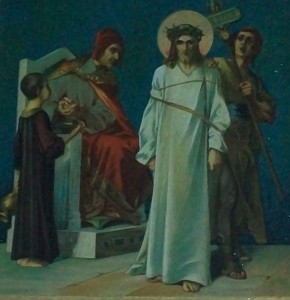 I - Jesus is Condemned To Death

To their amazement they heard their Parish Priest announce that a much talked about modernisation of the church was going to go ahead shortly and that, at the same time, it been decided to obtain a new set of Stations as the current ones would be too “old fashioned”. He jokingly asked if anyone knew of a good home for the old set. . . and two hands shot up! Providential or what?

Having contacted Fr John, who never turned an opportunity like that down, they then had to see how to get the free of charge 14 wood framed Stations to Cyprus, only to discover it was likely to cost over £300 for shipping – oooops! A day or two later coming across a Cypriot friend they hadn’t seen for some time they asked if he had any ideas of a cheaper method. The whole scenario of the significance of the Stations, the meaning for Catholics and the providential story of their being available was explained and the friend offered to talk to a friend of his in London who “worked with cargo” at Heathrow.

A few days later, a message came through that the friend of a friend could arrange a shipment on a flight going to Cyprus the following week but unfortunately there would have to be a charge and would £10 be alright? It turned out the contact was in fact one of the most senior managers in BA Cargo!! A tea-chest was procured, filled in no time and off the Stations went. 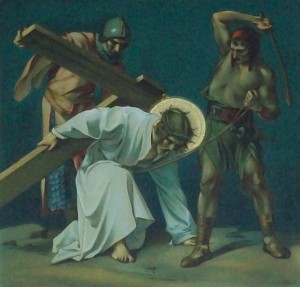 Fr John was alerted and he met the flight at Larnaca, ready to whisk his new acquisitions back to the church but was surprised to held up at Customs. They demanded payment of import duty even though the chest’s contents were listed as having little or no value. Their argument was that English people are not daft – they would not go to all the expense of shipping a tea chest by air if the contents were not valuable. A £300 fee would be appropriate they thought.

Fr John, being Fr John, took an interesting approach. He told the Customs Officers they could keep the chest. . as long as they understood the potentially dire personal implications. When quizzed about that comment he pointed out that these were holy pictures on their way to a holy Orthodox place through the providential intervention of God’s work and who knew what disasters that interference might bring on anyone who chose to go against Divine will? A revised fee of £10 was hastily agreed!!

So there they are, on display today, looking as if they were made for Agia Kyriaki. Actually 13 are on display – a few years ago someone stole the 14th Station and a replica has taken its place. . . .

Our continued thanks to the parishioners of St Pius X, Narborough, Leicestershire for their gift